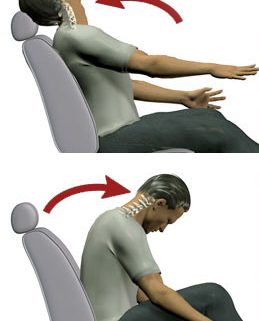 The cervical vertebrae are the topmost seven bones of the spinal column. Important nerves exit between each of these vertebrae. The vertebral arteries run through small holes in the boney processes that are at the sides of these vertebrae.
Whiplash is the term commonly used after abnormal flexion/extension forces are applied to the cervical spine such as may occur in a motor vehicle accident, sports, or even amusement park rides. Neck associated disorder refers to neck pain that occurs in the absence of these forces. It is a common experience. Most of us will have at least one episode of neck associated disorder in our lifetime. Having had at least one episode makes it more likely that we will have another one at some time in the future.

Neck-related pain can be either localized or referred. Localized pain is at the one spot. Referred pain can be felt near or far away from the injury. Pain referred from neck related muscles may produce pain anywhere in the head (headache), upper back, or arms. If the nerves that exit between the neck vertebrae are involved, there may be pain or weakness into the arms, hands, and fingers in predictable patterns.
You may feel pain or stiffness in the neck right after an injury, or it may appear and become worse over the following few days.

When hit from behind by surprise, there can be hyperextension (backwards bending) of the neck that is not limited until hitting the headrest. In reaction, the head and body is often thrown forward. This can lead to a hyperflexion (bending) injury. These abnormal movements can lead to injury of the ligaments that normally stabilize the neck and limit abnormal movement. These ligament injuries may be mild or severe. There is also the risk of fracture of the vertebral bodies, although this is much less commonly seen. Risk factors for Neck Associated Disorder include age, family history, sedentary, and repetitive work. Degenerative joint changes are often seen on X-ray and do not always explain the reasons for someone’s neck pain. They are often seen also in persons with no neck pain.