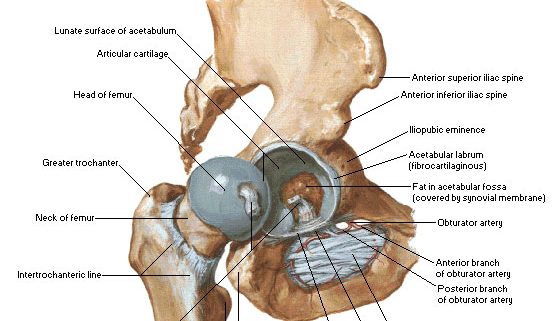 How does the hip joint work?

The hip is a ball-and-socket joint that helps you move your legs during everyday activities such as walking and going up and down stairs. It has a good range of movement but it’s very stable and rarely dislocates, even after high-impact trauma. The ball of the joint, which is at the top of the bone in your upper leg (the femur), is called the femoral head, and the socket created by the hollow of your pelvis is called the acetabulum. The joint is surrounded by a tough, fibrous sleeve called the capsule, which helps to hold the bones together. The capsule is lined by the synovium, which produces a fluid (synovial fluid) that nourishes the cartilage and lubricates the joint. The hip joint is moved by a number of muscles that allow you to rotate your hip and walk.
Most hip pain has a very simple explanation, for example if you’ve overdone it while exercising. The pain is usually caused by strained or inflamed soft tissues such as tendons, and it often clears up within a few days. Long-term hip pain can be caused by specific conditions. Pain caused by a problem in the hip joint can be felt in the groin, down the front of the leg and in the knee. Sometimes knee pain is the only sign of a hip problem. This is called referred pain, and it’s fairly common. Hip pain can also be felt in the buttock (although pain in this area can also be caused by problems with the lower back) or on the outside of the hip.

Simple painkillers such as paracetamol (an analgesic) may help to ease pain. It’s best to take them before the pain becomes very bad, but you shouldn’t take them more often than every four hours or more than eight in 24 hours.
Non-steroidal anti-inflammatory drugs (NSAIDs) such as ibuprofen, which you can buy at chemists and supermarkets, can also help.
You can use painkillers and NSAIDs for a short course of treatment of about a week to 10 days. If they’ve not helped after this time then they’re unlikely to and you should see your doctor. However, if they do help but the pain returns when you stop taking them, you could try another short course. You can also try rubbing anti-inflammatory creams or gels onto affected areas.
If you’re pregnant, if you smoke, or if you have asthma, indigestion or an ulcer you should speak with your doctor or pharmacist before taking ibuprofen or aspirin.
If you have circulation problems, high blood pressure, high cholesterol or diabetes, you should check with your doctor or pharmacist whether over-the-counter NSAIDs are suitable for you, in case they could interact with any medication you’re taking.
If you have stomach problems after using over-the-counter medication, you should stop taking the tablets and see your doctor.

Physiotherapists recommend that you don’t rest for more than a few days – start some gentle exercise as soon as the pain begins to ease. Simple exercises can help to restore your range of movement, promote strength, ease stiffness and get your hip back to normal.
Start by exercising very gently and build up gradually.
When the pain is gone and you’re feeling better, it’s important you continue to exercise on a regular basis otherwise the improvements you’ve made will disappear within a few weeks.
Physiotherapy hip exercises are designed to stretch, strengthen and stabilise the structures that support your hip. They may not be suitable for all types of hip pain, so it’s a good idea to get advice from a doctor or physiotherapist about specific exercises before you begin. You should stop if you get any joint pain that doesn’t go away quickly.

It’s generally best to carry on doing your normal activities, but try not to overdo things. You might need to pace yourself to allow you to do a little bit more each day. Try the following tips:
• Avoid sitting in low chairs as this bends the hip a lot and might give you more pain.
• Don’t carry heavy weights. Use a trolley when you go shopping if carrying a basket is uncomfortable.
• Find a comfortable sitting position at work to lessen the strain on your hip.
• Use a walking stick to make walking easier. Use the stick on the opposite side to your painful hip. A therapist or doctor can advise on the correct length and the best way to use the stick.
• Lose weight if you’re overweight.
• Alter activities where you have to stand on one leg; for example, when you get into a car, sit on the side of the seat and swing both legs in rather than stepping in one leg at a time.
See more at: http://www.arthritisresearchuk.org