You are here: Home1 / Blog2 / Fitness3 / Doctors writing prescriptions to get patients active 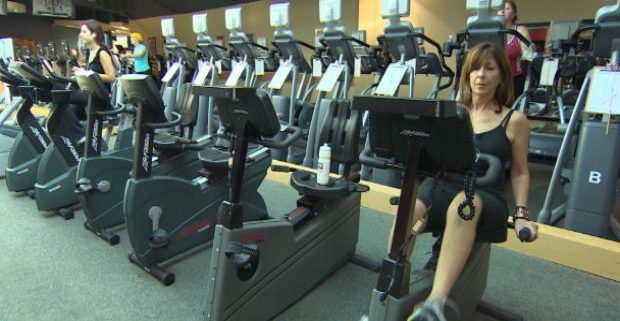 Canadian doctors are increasingly turning to prescriptions of exercise as a means to prevent and treat a host of illnesses.
In Leduc, Alta., south of Edmonton, family doctors realized the authoritative impact of a physician’s prescription.
For a year, they’ve handed out “Prescriptions to Get Active” — complete with check boxes for the intensity, duration and type of physical activity — to patients they consider healthy but at risk for obesity and chronic diseases.

Exercise is part of Kimberley Harris’s recovery prescription.  (CBC)
“There is a sense of tangibility and authoritativeness to a prescription,” said Dr. Justin Balko, a family physician and president of the Leduc Beaumont Devon Primary Care Network. “People understand what a prescription is. They know it’s not just a good idea. It’s a health expert telling them that they want to do this for their own health.”
Balko said more than 200 individuals have taken up the recommendations by signing up with a city’s recreation centre, which offers a free month-long membership as part of the program. Of those who signed up for the month free, nearly 30 per cent continued with long-term memberships. Other patients may be getting fit on their own.
Balko was inspired by researchers in New Zealand. Since 2003, they’ve published studies in medical journals showing how doctors’ prescriptions for exercise in that country can increase physical activity in adults by 10 per cent for at least a year.
Participants in Alberta are also provided time with an exercise specialist, who gets them accustomed to the facility and its  equipment and who helps reduce barriers to getting active.
For the family doctors, the printed prescription pads are quick and easy to fill out, similar to the scripts they commonly use for medications.
At Toronto Rehab hospital, doctors have found that people living with heart disease who exercise regularly have a 50 per cent lower chance of dying than cardiac patients who don’t work out.
Making doctors champions of exercise
“We think that exercise is the most helpful element that we could think of,” said Dr. Paul Oh, medical director of the cardiovascular prevention and rehabilitation program. “For brain health, for heart health, for cancer, for arthritis, the benefits are so large.”
For an exercise prescription to be a success, doctors need to spend a few minutes counselling patients, setting up goals and an action plan, something Oh acknowledged that doctors aren’t well trained to do. He said there’s a movement afoot to train physicians to be better prescribers and champions of exercise.
Kimberley Harris, 42, goes to Toronto Rehab to follow her prescription to walk an 18-minute mile twice a day and lift light weights two or three times a week, all in the hopes of delaying the heart transplant she needs.
Harris was born with a very rare heart condition. Following reconstructive heart surgery as a teen, she had a heart attack in her mid-30s and now has a mechanical valve and an implanted defibrillator.
“It is part of my recovery prescription,” Harris said of the exercise routine. “It is just as good as the eight drugs that I take daily. It helps my head a lot more than the drugs do.”
Harris said that without the support and accountability provided by her health-care team — which includes doctors, nurses or nurse practitioners, dietitians, exercise rehabilitation supervisors, lab technicians, a psychologist and a social worker — she wouldn’t follow through.
“It keeps you on track,” said Harris. “It is so easy to go home and sit in your house and say, ‘Oh, I am feeling sick. I don’t want to do anything.’ You are not allowed to do that here. You have to keep on track, it’s a much more structured program.”
Harris said she wishes the health-care system that caters to people after they’re sick would pay more attention to preventing illness, particularly in congenital patients like herself.

Exercise 'as Good as Medicines' in Treating Heart Disease and Dia...